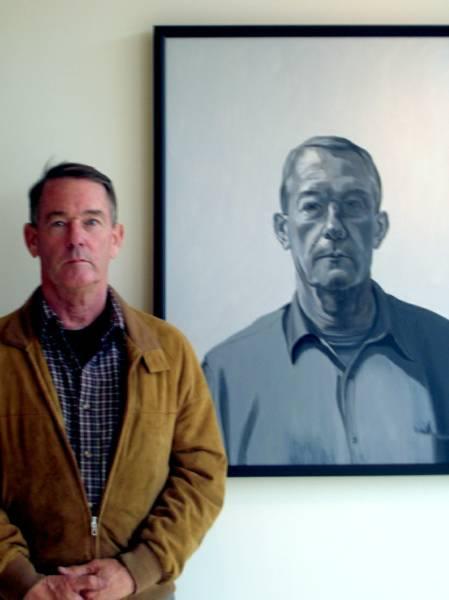 Jeff Richards, standing next to a portrait by Sharon Brown, from her series "The Creators".

Jeff Richards - Some of the Story

Standing at the abyss of existential despair and the prospect of a mid-life crisis at the tender age of 35, Jeff Richards decided a 180 degree turn was in order - he sold his cabinetmaking business and embarked on a lifelong dream of becoming an artist, taking 7 years to complete a BA degree in Studio Art at San Francisco State University and an MFA degree in Sculpture from the San Francisco Art Institute. He then spent the next 7 years unlearning everything he’d learned in art school, at which point he began the real work.

There were two major crossroads on that path through the labyrinth of meaningful creativity. The first appeared when an artist friend approached him with a box of industrial sewing thread spools, thrusting it in his hands with the admonition “I’ve had these for 2 years and I don’t know what to do with them, you give it a try!”. Being a sculptor, and having never sewn in his life, Richards promptly placed the box on a shelf and forgot about it – until one day a voice drew him back to the forgotten container, and he began idly playing with the strange material, never expecting much to come of it. 2 years later sewing thread was his primary medium, proving once again the value of secondary processes.

The second crossroad followed a series of uncanny synchronicities - some painful, some magical - over a period of 9 months which, woven together into a web of fate, created a catalyst that manifested on August 18, 2008. All of the years of work, of laborious exploration, of deep mining within the psyche, suddenly alchemized and thrust him into creative warp drive. Nothing has been the same since.